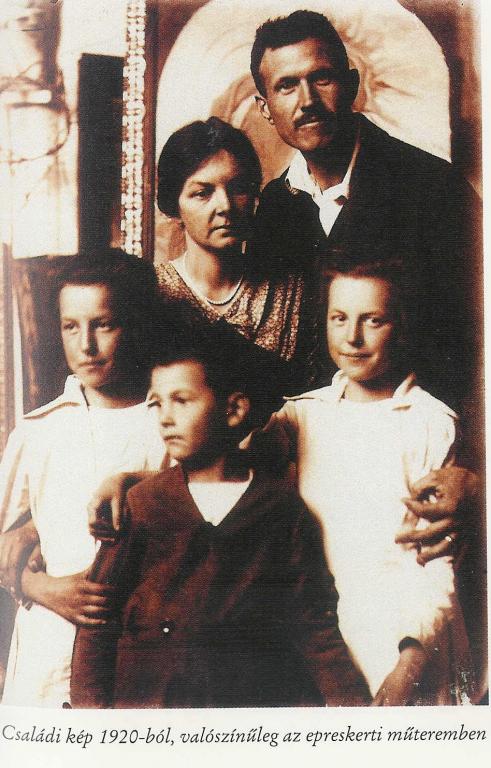 Jenő Bory was born in a family with seven children in Székesfehérvár on 9th November 1879. His father was a fitter, who raised his children with great. He studied at the grammar school of sciences in Székesfehérvár and then he enrolled to the Architectural faculty of the Nádor József Technical College. During his studies he received the millennium scholarship of his hometown, and in the second year he was given a state scholarship. He graduated in 1903 as an architect.
„I went to grammar school in Székesfehérvár, and as a good student, a good athlete and an excellent drawer I received the 200 korona millennium scholarship from the town to be able to enrol to the University of Technology. I wanted to become an artist at that time already, but there was a sentence in our grammar book that we had to translate into German: “Art is beautiful but you can’t make a living as an artist.” So I thought I would go to the University of Technology first and then to art school because I also knew already that architecture and sculpture are united in body and soul. I had seen sculpture competitions where architects and sculptors worked together on the plans and I thought how much better it would be if these two were one person. ” (Citation from Jenő Bory’s autobiography.)

He started his one-year long voluntary military service in Vienna that year and after that in 1904 he applied to the “Mintarajziskola” (art school which later became the Hungarian University of Fine Arts) together with András Dávid with the intention of studying sculpture in Hungary and not abroad. At that time there was no such training in Hungary. Their application also played a part in the decision that the first sculpture class was started under the direction of Alajos Stróbl. Bory studied sculpture at the Mintarajziskola from 1904-1906 and then he continued his studies at the Sculpture Master School at Alajos Stróbl. At the Mintarajziskola he took part in Bertalan Székely’s painting and drawing classes. Both his teachers encouraged the talented young student and helped him develop his art skills.

He first took part in the exhibition of the National Fine Art Association with his statue called Bandika in 1906. From that time, he was a regular participant at the exhibitions of “Műcsarnok” (Kunsthalle), the National Salon and the Ernst Museum.

He went on a two-year study trip in Germany and Italy. At the world-famous workshop of the Paolo Trisconia company in Carrara, he studied the processing of marble and the making of marble sculptures. This was where he carved the portrait of his young wife, the Mona Vanna.

In 1909 the architectural plans of the church called Heart of Jesus were excepted and Bory took part in the construction as well. It was consecrated in 1911. Its concrete dome which was made without any outer cladding was the first artistic use of concrete in Hungary.

His twin daughters were born in 1910.

In 1911 he was entrusted with teaching moulding at the National College of Drawing Teachers as a teaching assistant.

In 1912 he bought a one-acre vineyard and orchard with a cellar and a grape press house on the declivitous hillside of Mária Valley in Székesfehérvár.

Until 1914 he made 10 significant honorary monuments in the Fiumei Street Cemetery including that of the Petőfi family. The busts of Vince Wartha and the linguist and mechanic Kálmán Szili were erected in the main hall of the University of Technology at the same time.

In 1914 his third child György was born.

From the 1914 mobilization he saw service as technical officer. In 1915 he was commandeered to Sarajevo where he took part in the application for the monument of Franz Ferdinand and Duchess Sophia. The monarch family found Bory’s work the best and he was assigned to carry it out. According to the plan a two-meter long and one-meter wide steel plate was sunk in the asphalt at the place of the assassination. It was decorated in the shape of the cross and there was a caption going around saying “Archduke Franz Ferdinand and his wife Sophia, Duchess of Hohenberg gave their lives and blood for God and their country at this place.” At the bridgehead of the River Mljacka the relief of the martyrs was placed on a dual granite column with a Pieta sculpture at the base. The monument was uncovered in 1917. As the sculptor writes in his memoir “This was the first heroic monument of those killed in action in the world war.” In 1919 it was dissembled and only the bench facing the bridge was left there without the caption. He also prepared the largescale plans of the Franz Ferdinand Votive Church and the Sophia Home but they remained a dream because of the occurrence of the war. Drawings of those can be seen in the Bory-castle. He received the Knight’s Cross of Order of Franz Joseph in 1916.

After disarming in 1918 he was nominated as a college professor at the College of Fine Arts, previously Mintarajziskola. From 1920-1944 he was a visiting lecturer of moulding at the faculty of architect of the József Nádor Technical University, where he also had his own studio.

In 1922 he organised an exhibition of collections at the Műcsarnok where he introduced his improved technique of marble carving. He received the Szilárd Rökk Prize for his work called Ecce Homo that could also be seen there. As a result of his research he found he could use the so called pirobasalt or pirogranite, the material he invented, in making sculptures. This material is also mentioned as Bory-bronze in scientific literature.

How did he start Building the Bory-castle? In 1912 he began to enlarge the house on the vine hill in Máriavölgy, Székesfehérvár. He continued it year by year and made a painting studio, a sculpture studio, buttresses, loggias, a hundred pillared courtyard, bays, towers with a view on the town and poems on the walls which all bless his wife. There are about 500 works of art that are displayed here. Some works of the best artists from Bertalan Székely to István Csók can be found here. The castle can even be found in the Guiness Book of Records as the largest building that someone built alone with his own two hands. This is what the artist himself says about the construction in his memoires:

„Let’s see a down-to-earth question now. How could one single person create this? The answer is terribly simple. If there was no cement, there would be no Bory-castle either. Drastically saying, the Bory-castle is a station in the experiment of concrete. There are 200 cylindrical, plain pillars here which all look as if they were formed in the lathe. But I made them all the same way; I poured the dilute concrete in a roller of tarred felt that was rolled twice and tied around with wire. So the shape of the pillar was ready. I could make 10 pillars with one paper. For the mosaics and captions I made their negative on a wooden board and I poured the concrete on them. This way the letters and the background become one piece and they never fall down. Captions were carved in cast negative and concrete was poured on it. One body. Unfailing, opportunity, artifice. Mankind has never had such building material as the cement (concrete) before.”

Not only the pillars and the carvings but also the statues, the domes, the door and the window frames were all made of concrete. The castle was built through 40 summers while the artist lived and worked in Budapest for the rest of the year. These years between the two world wars were very productive. Let’s mention just a few of his works from then.
He completed the inner and outer decoration of the Bishop’s Church in Kaposvár. 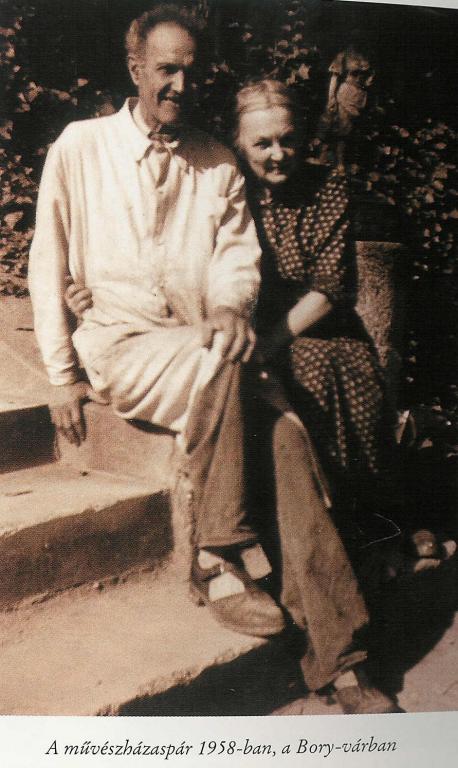 In 1927 he made the Wounded Hero in remembrance of the Technical University students killed in the First World War and it was also inaugurated that year. The statue was removed in 1948 and its bronze parts were used at the moulding of the Stalin statue. However, its cast model remained in the collection of the castle so it was possible to re-erect it in the garden of the Technical University in 2000.
The Bishop’s Fountain, which he made in 1927 and which is decorated with the figure of the 4 important bishops from the period of Stephen I. can now be seen at the Market Square (Piac tér) in Székesfehérvár.

At the World Expo in Barcelona in 1929, he received a silver prize for his statue called Yearning. His statues and reliefs can be seen in Székesfehérvár, Mór, Budapest and in many other towns of the country. We can find one of his popular works of art, the Birth of a Huszár (Hungarian cavalryman), at the public pool in Székesfehérvár and in front of the obstetrics of János Hospital in Budapest.

During World War II. he lived in the castle right in the middle of the of the battles. The castle was bombed and all the towers were injured. The soldiers shot at the sculptures and the pictures were cut to pieces. He spent his retired years with the reconstruction of the castle and he was the tour guide there. He died on 19th December 1959 in the Bory-castle. He was laid out in his studio and also his former colleague Alajos Kisfaludi Stróbl appeared at his memorial service there. He was buried in the family sepulchral vault at the Csutora Cemetery in Székesfehérvár.