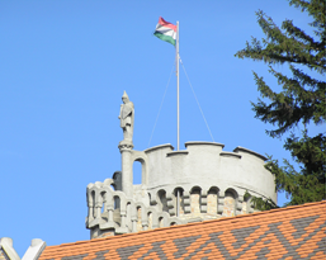 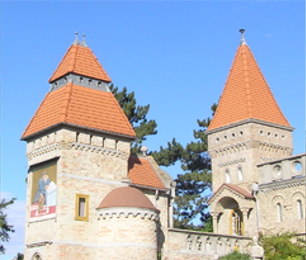 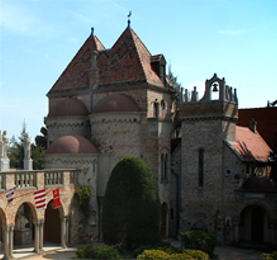 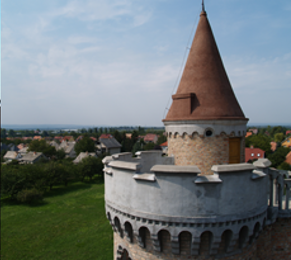 The castle was built by Jenő Bory (1879-1959), who was a sculptor and architect, a professor of sculpture at the College of Fine Arts and that of architecture at theTechnical University Budapest. He followed his own plans and imagination, and raised this special castle through 40 summers. It is a memory of his eternal love for his wife and his artistic dreams.

Jenő Bory bought the land of the castle where there was only a press house and a wine vault among grape and fruit trees in 1912. He enlarged the press house to an accommodation and developed a studio above it. He only started building the castle itself after the First World War, when he could afford it from the fee of his sculptural orders.

He continued building the castle, elaborating details and doing reconstruction works after the Second World War until his death. He mainly worked alone relying on his own two hands and resorted to occasional help only a few times. He was a qualified architect, but instead of factual plans he followed his imagination and adapted to the topography of the land. The slowly growing walls, the shapes of the towers and the areas surrounded by them are all the result of the same artistic idea as the statues. This way, the Bory-castle is nothing else but a sculptural work of art with architectural forms and sizes.

Walking in the castle, the visitor can realise that the material they meet everywhere again and again is the concrete. More precisely, it is the so called quartz concrete which Jenő Bory preferred. At the beginning of the twentieth century concrete appeared in architecture as a new material and in Hungary Jenő Bory was one of the first ones who used it. The door and window frames, columns, domes, balustrades and staircases, and also fountains, pools, statues and relieves in different sizes were made from this material.

He filled the castle with works of arts of contemporary artists, his wife Ilona Komócsin (1885-1974) and those of his own. An exhibition of sculptures and pictures can be seen in the studio gallery.

In the Court of the Hundred Columns, under the archways, you can find plaster statues, the bronze or marble originals of which can still be found in different parts of the country. Behind, in the Chapel the sculpture symbolizing the eternal love of men for their wives is awaiting the visitors.

Bory-castle is now in possession of Jenő Bory’s descendants who manage and look after it with daily hard work with the help of the foundation they have established.